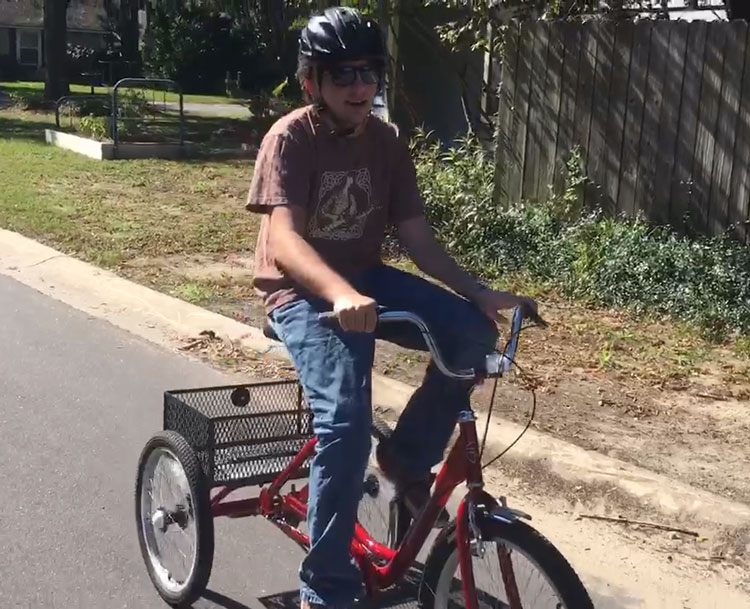 The mom of all moms, my mom, has been telling both my brother and me that we need to be sure to have our Christmas list ready by Thanksgiving day, at the VERY latest. At first this was equally as difficult as it is each and every year. Then, one day, during an OT session my therapist, Vicky Whalen, and I started talking about bike riding because another neuro patient at therapy was busy practicing riding a harnessed bicycle. I would peek over at her with my jealous eyes without being able to hide it and that enticed Vicky to bring up the fact that the other patient was rather big into biking before her accident and invested in a trike for home use.

After hearing this it made me think, “TRIKE! That’d make a PERFECT big present for my birthday (12/21) + Christmas present!” Upon returning home
I texted both of my parents about the idea and they suggested for me to
call around and see where in town we could find a good one. I agreed that that was a good idea and was sure to call my “go-to” bike shop in town, the Trek Bicycle Store of Mt. Pleasant. Also known as, the store where the bicycle I was riding during my accident came (which I had also gotten for Christmas one year). After relaying the heads-up that they fortunately had an adult trike in stock both of my parents agreed that we would be going up there that Saturday! With all of the anticipation of getting to try and pedal a legitimate bike setup  the following three days of the week were truly going by slowly but surely. BUT, when that day finally rolled around I had no problem waking up at a decent hour…even on a Saturday at that! Upon walking into the Trek Store we coincidentally started talking to the store’s “shop mom” and she took us back outside, where the trike was being modeled for the world to see.

Upon sitting on the bike my nerves decided to show themselves by allowing the extensor tone in my left leg to shoot out and my left arm to contract-in via my flexor tone. I had honestly come to terms with the fact that such a thing was likely happen because although my brain was familiar with the act of riding a bike, it just hadn’t experienced the real thing in 3+ years. Not to mention that I was feeling a slight case of anxiety because I only had that one chance to give it a go. As well as the fact that I was in front of the “shop mom”, who I had never met before and my dad who had his phone out to use as a camera to show the world that I was back to my usual pastime of pedaling around. After being unable to keep my left foot on the pedal and almost
running into one of the building’s exterior columns (not pictured in this image) due to my left hemiplegia I decided to call it quits on this highly anticipated event… When I did so the “shop mom” indirectly revealed as to why they refer to her as that and stated that she was sure that she could talk the manager on duty into allowing us to take home the trike on approval for a “test drive”. At first I didn’t allow myself to get my hopes up, but sure enough the “shop mom” did what all moms tend to do and did not give false hope! My mom and I had ridden up there in her sedan and my dad met us in his magazine distribution van, which obviously tends to be FULL of magazines, so neither vehicle was able to take it off site right then and there. We all agreed that my dad could pick it up that next day, Sunday, 11/30. In the meantime “shop mom” convinced the repair guys to replace the default pedals with racing bike type pedals that had toe straps that wouldn’t allow my left leg extensor tone to cause problems with my foot slipping off the pedal.

That Sunday, when my dad rolled the bike in the house it had noticed that one of the rear tires had unfortunately become flat somehow. That drove my dad to do something he’s been meaning to do for his own personal beach cruiser for awhile…buy a bicycle tire pump. None of us really had a chance to try and pump the tire back up until the following Thursday after I had therapy when I realized that’d make a good goal for me to try and pump it up on my own and, more importantly, the fact that I did not want to overextended the favor that Trek was oh so generous to grace us with. I was successful in my attempt in pumping the tire up, but the air maintaining its place in the tire not so much. I once again texted

both of my awesome parents with the not so awesome news of the incompetent tire. My dad had, thankfully, agreed that he would be able to run the tire up to Trek to have them replace the tube. After hearing that I called Trek to assure that they would be cool with that and they were!

When my dad returned home with a tire that had a new tube that was able to remain fully inflated it was a relief to see. With that being said we immediately put it back on the trike! I felt inclined to ask my parents if they would mind spotting me on a trial run right then and there. I then decided I’d better not ask because I know that they would have just made the very reasonable point that it was dark outside and it would have been only my second time trying to attempt pedaling around since my accident, so I managed to fight my drive to get back in the swing of things.

There unfortunately didn’t turnout to be a good time for us all to take the trike for a test run the next Friday either. Although, my mom and I did make a commitment that evening that we would DEFINITELY take it out that next day, Saturday, 11/5, before I left for plans with a friend at 1 p.m. and my dad also made the commitment to return the trike to Trek that following Sunday!

When waking up that Saturday I once again had no issue getting up…for the trike’s sake. I got ready on my own that morning, like I’ve been doing everyday for at least the last two years, but this time MUCH faster than normal in anticipation of getting another chance of pedaling around completely on my own! After eating breakfast my mom and I went straight outside and I gave the trike a second try!

The first thing I noticed different about riding it around our cul-de-sac was that I felt under MUCH less pressure so much so that I was able to think about step one, mounting myself on the seat. With that being said I figured out that approaching the bike from the lefthand side allowed my left leg to remain planted and my right leg to go through the trouble of going up and over the frame. Step-two should have been me pulling my left leg up into the racing pedal cage that Trek was nice enough to install. I have to admit that I honestly didn’t have the patience to fight my left leg’s tone to get it strapped in there, so I had my mom help execute that step. I then helped to stretch my left arm up to the handle bar, took the parking break off and began pedaling! I was a little surprised that my left arm wasn’t forcing me to turn the whole trike to the left, but the fact of the matter is that it wasn’t!  Although, when I went to take an intentional turn to the left I experienced the only real problem of that ride. That issue was that I think the seat might have been a notch too high because the handlebar insisted on butting into my left knee while trying to get a little more oomph into a full u-turn. I thankfully managed to still turn around safely/efficiently though and started coasting back to the house like it was no problem at all!

Long-story short, I’ve officially narrowed my big Christmas present down to asking Santa for one of two different makes and models of one-speed adult trikes that Trek recommended, but both will need aftermarket racing caged pedals added! In reality though my parents can feel free to get me which ever bike I have on my list as both a birthday AND Christmas present seeing as my birthday always has been, always will be, close to Christmas on 12/21. Not to mention that neither bike is inexpensive, so I’d rather not come off as a spoiled brat by getting the trike as just one rather MASSIVE gift. SO, if anyone would like to go for a ride around the block shortly after Christmas I’ll be more than ready to join you!